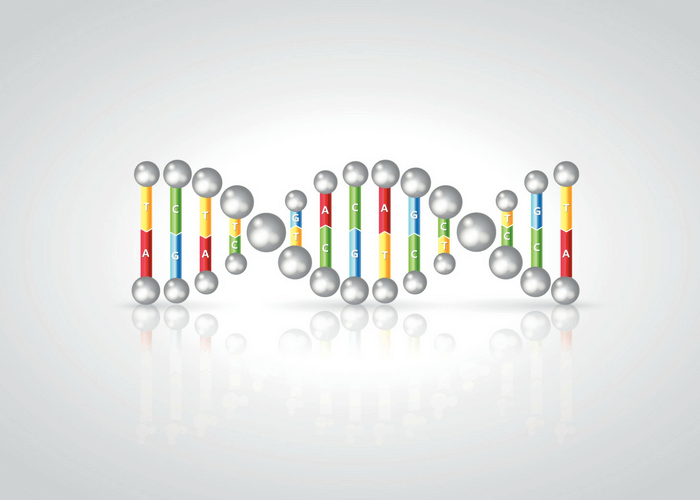 With the popularity of DNA testing for ancestry and up-and-coming lifestyle tests for fitness, nutrition, skincare and more, the science of DNA has finally entered the mainstream of the American consciousness. Home DNA paternity test kits have been in retail stores and available online for years, but now you can collect your DNA in the comfort of home, send in your sample, and in a few weeks, you find out your ancestors’ migration routes, your body’s response to important nutrients, the exercises that work best for you, or how sensitive your skin is. You can even use DNA to determine your mixed-breed dog’s parentage or screen your cat’s genetic health. The useful applications of DNA analysis are exploding, and it truly is a hot science with endless possibilities. But most of us aren’t scientists and may not have even a basic understanding of what DNA is or how it works, so here are 10 very basic yet helpful DNA facts for everyone.

1.DNA stands for deoxyribonucleic acid and is your body’s basic messenger of creation

What does DNA do? To put it very simply, specific DNA sequences send messages to proteins with instructions on a task to perform, such as “make a human fingernail.” DNA for each species is unique, which is why humans only create other humans, kangaroos make other kangaroos, and daisies produce only other daisies and not tulips.

2. DNA is found in every living thing

Plants and animals all have DNA. It’s found mainly in the area of a cell called the nucleus, and also in the part of the cell called the mitochondria. Each and every human cell may contain 10,000 genes made up of DNA, and if you unwound and tied together all the DNA in that cell, it would stretch 6 feet. This gives an idea not only of how much DNA is in each cell, but also how tiny these “building blocks of life” are.

The bases in DNA are adenine (A), guanine (G), thymine (T), and cytosine (C). These are chemical bases; they exclusively pair as A to T and C to G, and are known as base pairs. Each base is attached to a sugar molecule and a phosphate molecule, forming what’s called a nucleotide. These are the basic components of DNA: how they work together is what creates scientific “magic.”

4. The structure of DNA is a double helix, so it looks like a spiral ladder or staircase

A strand of DNA actually looks like a twisting ladder, with the base pairs forming the rungs or steps, and the sugar and phosphate molecules creating the sidepieces of the ladder or railings of the staircase. What’s important to remember about this structure is that the order of the rungs is what helps determine what the DNA codes for, be it for a human hair or a tree’s leaf.

5. DNA is found in genes contained in chromosomes

A lot of people get genes and chromosomes confused. Genes are made up of DNA. Because each cell has so much DNA, the strands of DNA wraps themselves into  extremely tight little bundles, or packages. The packaged form of DNA is called a chromosome. The explanation of all this can get kind of weedy pretty quickly, so the easiest way to visualize it is: DNA is in genes and genes are on chromosomes.

6. 46 chromosomes are found in humans

Typically, human beings have 23 pairs of chromosomes in each cell. Of those pairs, 22 look the same for both males and females. It’s that last chromosome that differentiates between the sexes. Women have two X chromosomes: XX. And men have one X and one Y chromosome: XY. On a family-relationship DNA test report, this is called the amelogenin gene.

7. The number of chromosomes varies from species to species

The number of chromosomes varies widely in the animal and plant kingdoms. Horses have 64, hermit crabs have 254, potatoes have 48, and a roundworm has only 2.  You can’t identify a species just by its number of chromosomes, and it’s not the number that matters, as much as the information contained on those chromosomes. Humans and chimpanzees share 96% of their genes!

With the possible exception of a few mutations, DNA profiles between identical twins cannot be distinguished from one another. That’s why these types of twins are called identical! When a single egg splits into two, 100% of the exact same DNA is shared by the two embryos. Fraternal twins, on the other hand, share the same amount of DNA as regular siblings do: 50%. Interestingly, identical twins may not have the same fingerprints. Fingerprints can be affected by hormonal fluctuations in the womb and environmental factors too.

9. DNA is inherited from our parents

We inherit half our DNA from our biological mother and half from our biological father. Brothers and sisters share 50% of each other’s DNA and you inherited 25% of your DNA from your grandparents. This is why a granddaughter might have her grandmother’s nose shape instead of her mother’s. Our overall appearance depends on so many genetic combinations coming from a DNA soup stretching back over the centuries! This is why, as a top paternity testing lab, we always counsel customers that physical appearance alone is never an absolute determinant of a biological relationship: only DNA testing can determine relationship for sure.

10. Because DNA is unique for each person, it can be used to identify people and can help establish paternity of a child

With the exception of identical twins, DNA is unique for each person. This is why DNA testing is used so widely in law enforcement, lifestyle analyses (like ancestry or skincare tests), and—of course—for paternity testing. A paternity test report shows the DNA data shared between the tested parties across 16 or more key genetic markers, and then uses a statistical formula to determine the probability of a biological relationship between the man and child tested. The science is so reliable that courts trust legal paternity test results when making important family-law decisions.

Welcome to the age of DNA! The science and its associated discoveries and applications are growing at an astonishing rate and this trend will no doubt continue well into the 21st century. The possibilities really are endless.

A Momentous Find: DNA Double Helix Structure In 1953, two talented scientists, Francis Crick and James Watson, building on the earlier work of their colleague Rosalind Franklin, discovered a structure in cells containing the blueprint that makes each creature...